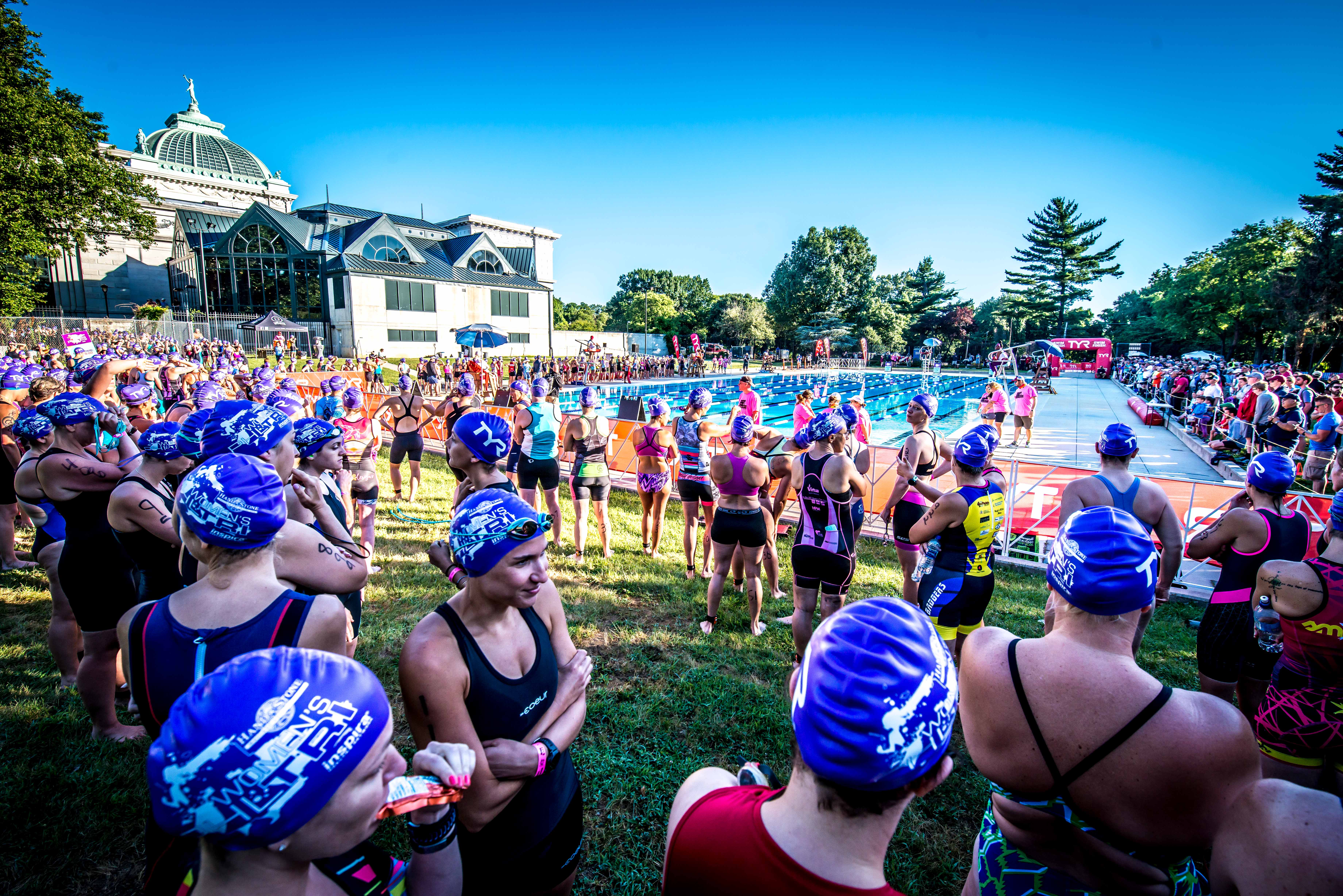 It was my 6th TBI Conference. Sitting in a room, in Dallas, Texas, with stake holders in the sport of triathlon from around the country and to a certain extend around the world. Bob Babbitt walked to the front of the room and expressed what he believed was the perfect solution to attract new athletes into our sport and played a video on pool triathlon. Pool triathlon is a NOT a new concept, it's been around forever, but truthfully, as a seasoned triathlete myself, I never gave it much thought. As I watched the video I was inspired to do something. I thought, "this is something we can crush, I just need to find the right location." Fast forward 1 hour. As I scoured the Internet looking for the right location, it dawned on me, the Kelly Pool in Philly... 50 meters long, 8 lanes wide, major metropolitan city... and MEN ARE NOT ALLOWED! The next 10 months were dedicated to the permitting process, relationship/trust building process, and bringing reality to what was once only a vision of the mind. The team at DelMoSports worked tirelessly to launch The Women's Philadelphia Triathlon under a bold statement: 1500 women in a classic triathlon format... swim (1st), bike (2nd), run (3rd).

My 7th TBI Conference. Sitting in a room, in Tempe, Arizona, with stake holders in the sport of triathlon from around the country and to a certain extend around the world. The theme of this conference was GROWING TRIATHLON and signing a pledge to add 100,000 new triathletes into the sport by 2020. At one point in the conference, people began standing and stating to the packed room, "I will donate $100,000 in free advertising." "I will start a clinic for inner city kids!" "I will teach 10 people to swim!" This went on for a good 10-15 minutes. Then I spoke up. "I've launched a women's only pool triathlon in Philadelphia, in the first week over 650 athletes signed up, we're going to sell out at 1500." Silence. I sat down. The next morning, I was going on a group ride and I was speaking with another race director. She stated she had once done a pool triathlon with about 300 women and it was a mess. Women swimming into each other in the pool, too crowded, just a hot mess. Then she said something that I will never forget, "How many do you have in the race right now?" I stated, "Almost 700 and climbing each day." She then said with a smirk, "And you want to do 1500... in a pool... Good Luck With That." "It will be too crowded, you can't do the swim first, you have to do the swim last, Good. Luck. With. That!"

I have a very good friend who has a very good saying: When the stakes are highest there are two types of people in this world: 1.) Those that focus 2.) Those that fold. And then he states with a smile, "I know what I am, do you?"

To be fair and perfectly honest, this person probably never meant to be sarcastic, or snarky, or negative... HOWEVER, the "Jersey" in me took it as a double-middle finger to the face and I firmly planted that statement/image on my left shoulder for the next 6 months and rode it from Southern New Jersey all the way over the Walt Whitman Bridge into Fairmont Park to the John B. Kelly Pool and produced the greatest event of my career to date. Note: I decided to heed a little advice and I capped the event at 1350 of which 600+ were first time triathletes. We did it.

Whether it be racing or producing somewhere along the line SOMEONE has tried to crush your/my/our dream... maybe not intentionally, but a comment here or there in the wrong tone can do one of two things: Focus... or Fold. It's hot, humid, sticky, if you're like me you need three showers a day just so you don't offend anyone. It's easy to take your foot off the pedal or let your guard down. It's easy to NOT SHOW UP TO THE GYM, or the training ride, swim, paddle, or whatever. It's easy to say, "I'm too busy. I have two jobs. I didn't get enough sleep.' Or worse... "I'LL START TOMORROW!" Just remember when you use an excuse you're giving the naysayers and the haters POWER OVER YOU. Start today. Start Right Now. Get After It… and Focus.

22-year-old Bobby Murphy suffered a severe brain injury last week after falling from the back of a truck and his family needs our help. They had to cut out part of his skull because of swelling. He was out of state when this happened and it is forcing a huge financial burden on his loved ones.

Spring. We Made It.

With every change of season, we welcome all that is fresh, new, and we are grateful to have made it through one of the toughest winters on record.

I've Got A Confession To Make

Recently, it was brought to my attention that I have not been around much...