The Wild Half Race Series Is Now The MudHen Half Marathon, 8K and 5K

The long awaited announcement is here. But first, a brief history of the Wild Half Race Series. 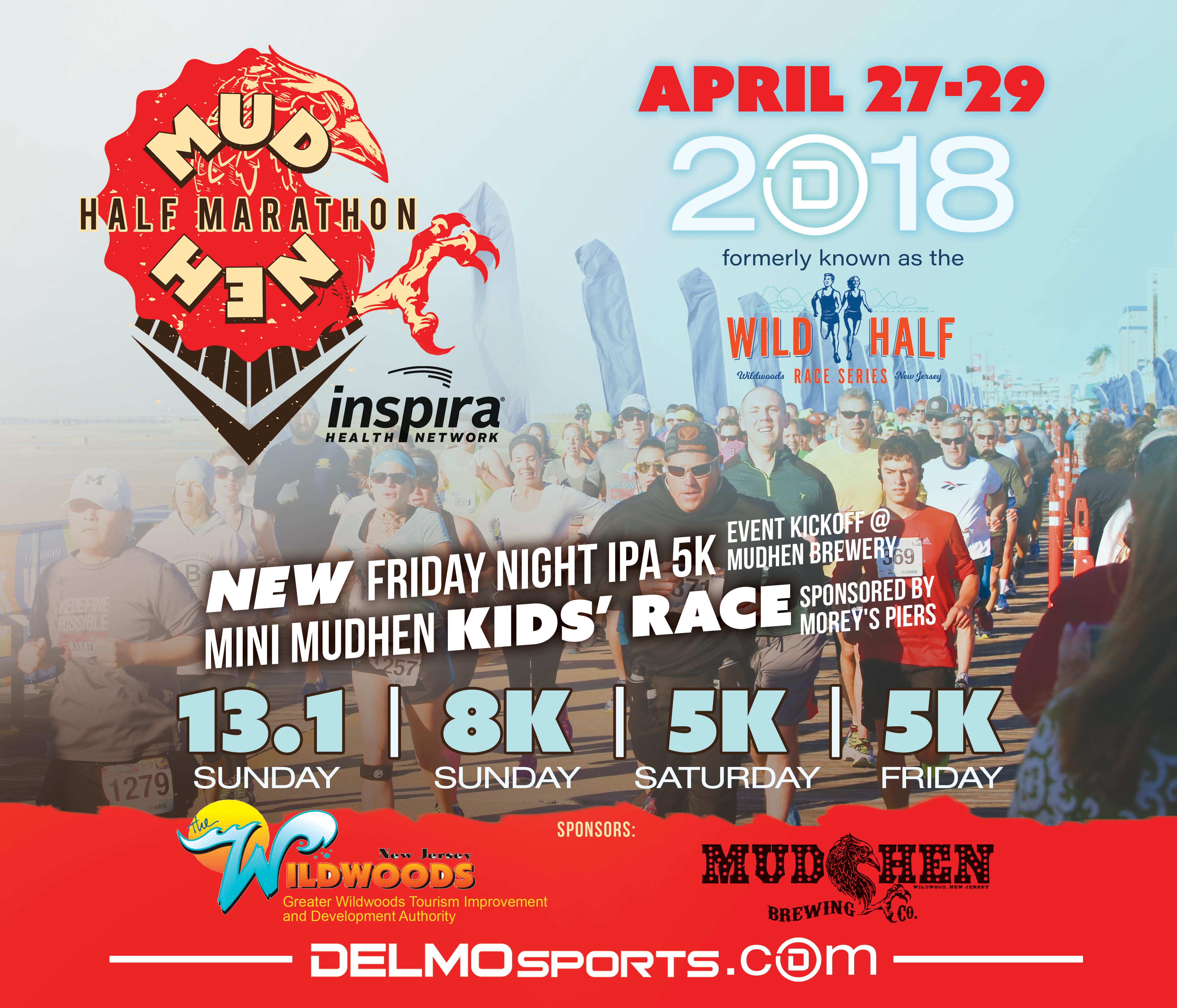 The long awaited announcement is here. But first, a brief history of the Wild Half Race Series.

In 2010, I was contacted by the CEO of Morey’s Piers to assist in developing a half marathon known as The Wild Half. We traveled to a well known, well attended half marathon and picked out all of the elements that made the event great. I was tasked with ‘finding a route’ that would work for the island. I presented what I thought would have been fun and exciting and the Morey’s “ran” with it adding their own input, tweaks, bells and whistles. I was excited that MY HOMETOWN was going to have its very own half marathon and to have played a small role in bringing it to life.

In 2011, the inaugural Wild Half was slated for the last weekend in August. I was scheduled to be the race announcer. Everything was looking good leading up to the event, but Hurricane Irene was barrelling up the coast and forced the cancellation of this event. To remedy this unfortunate circumstance, runners were given the opportunity to race 2012 for free.

In 2012, plans were once again rolling for the 2nd Annual (inaugural) Wild Half in late August.  I was re-booked to be the race announcer and was excited to do so. The evening before the race a massive thunderstorm hit the Wildwoods and had partially flooded the course as well as knocked down flags and fencing at the finish line. The race crew worked tirelessly through the night to assure athletes would have the best experience possible. For those of you who remember, the finish for that event was on the beach!

In 2013, the organizers had had enough of the late August weather ‘surprises’ and tried to secure another date without success, leading to the cancellation of the race that year.

In 2014-15, the Wild Half moved to the third weekend in May. This proved to be a successful weekend, but it also proved to possibly interfere with Mother’s Day Weekend in the future as well as conflict with other events around the Convention Center. The decision was then made to move the race to its permanent home of the last weekend in April.

In 2016, DelMoSports was brought in as the event director for the Wild Half. Over the years we personally witnessed this event go through many changes and deal with uncontrollable circumstances. Our goal was to give this event stability for years to come and in order to do so, we felt it was necessary to enhance the following:

In 2017, the Wild Half experienced its best event to date. It was our 2nd year as race directors and everything was stellar from start to finish. To further enhance the race, DelMoSports helped usher in the following improvements

Immediately following the 2017 event, it was brought to my attention that the Morey Organization felt the future of the Wild Half would best be served in the hands of DelMoSports. Over the course of several months we came to an agreement for DelMoSports to take complete ownership of the event.

I want to be clear: Without the devotion of the Morey Organization and the Greater Wildwood Tourism Improvement Development Authority, the Wild Half Race Series would not exist. Their vision for excellence persevered when others would have given up.

DelMoSports and the Greater Wildwood Tourism Improvement Development Authority are proud to present the MudHen Half Marathon Presented by Inspira Health Network.

Wait. What?
The MudHen Half Marathon?

The MudHen Half Marathon is named after the first passenger train in Wildwood, NJ. It is reflective of its industrial, innovative and opportunistic roots. In 1883, the West Jersey Railroad was created to carry passengers from Cape May Court House to Anglesea over a precarious bridge through the marshlands. Often washed out at high tide, the train nicknamed the “MudHen,” with its “I think I can” attitude, chugged its way through the streets of the Wildwoods. Like the hardworking class of people who traveled to Five Mile Island to seek greater living, the MudHen Half Marathon conducts a history lesson in every step.

It just so happens in the center of town a magnificent brewery, the MudHen Brewing Co. and Smokehouse, is being built by the Sciarra Family, owners of the Kona Surf Co., Dogtooth Bar and Grill, and Poppi’s Brick Oven Pizza & Kitchen.

The MudHen Brewing Co. and DelMoSports are locally owned and operated businesses with one passion in common: Everything we do MUST be world class... but with a local feel.

If you love the following, you’ll love the MudHen Half Marathon:

When combining a WORLD CLASS running event and a WORLD CLASS brewery (MudHen Brewing Co.), you get the MudHen Half Marathon formerly known as the Wild Half Race Series.

The schedule for the 2018 MudHen Half Marathon will remain the same with a new addition!

In order to better showcase the island and our brand new world class brewery we’re kicking off the weekend with an additional race… Friday Night IPA 5K at the MudHen Brewery. the Friday Night 5K starts/finishes in front of the MudHen Brewing Co. This run course showcases the historic Wildwood on a combination of closed roads, the historic boardwalk, and bike path! A fantastic after party at the MudHen Brewing Co., awaits finishers of all ages for awards and prizes! Use this event as a fun Kick Off for the weekend! The more you race, the more BLING you collect!