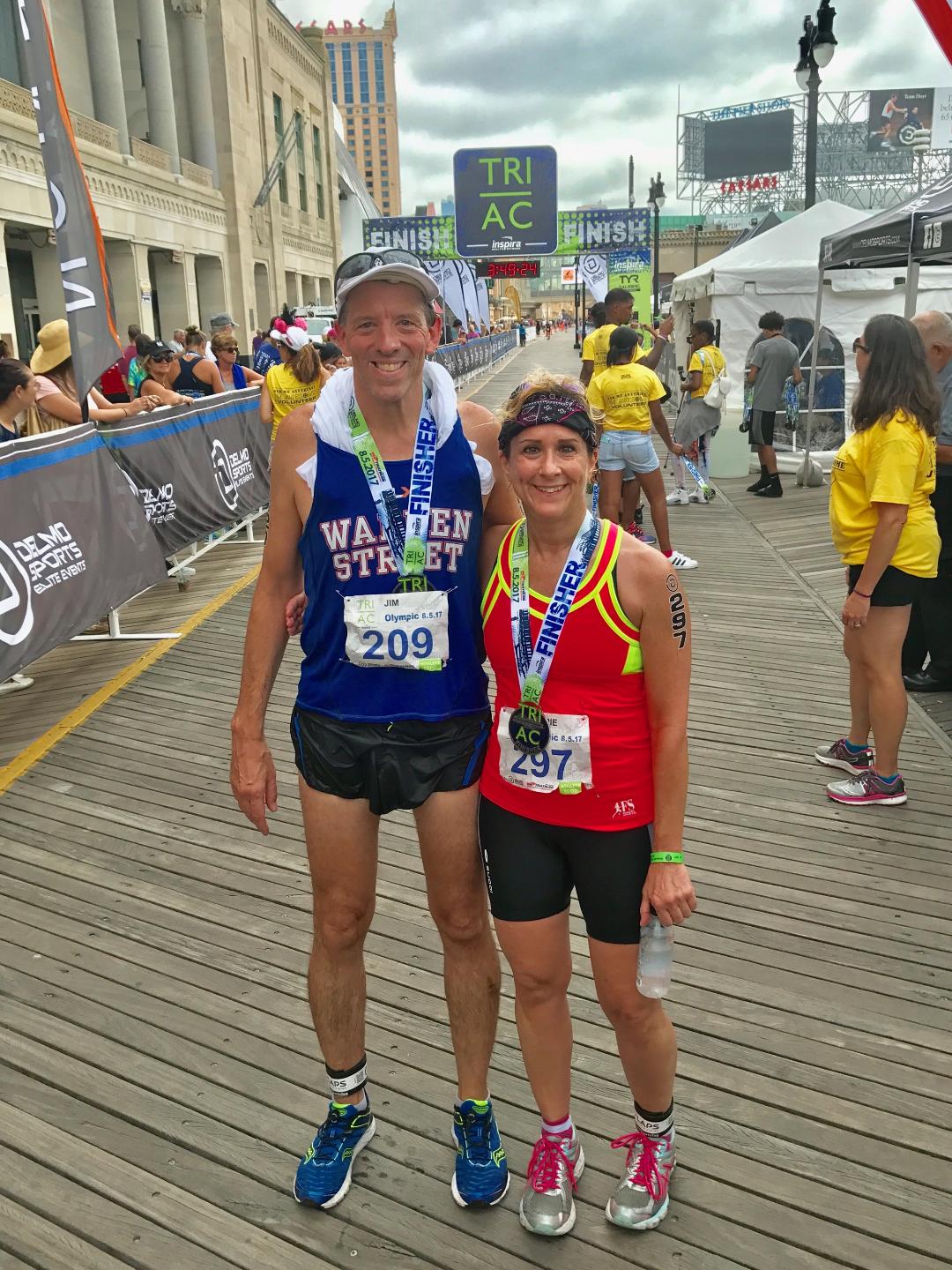 Fast forward to 2007. I had been divorced and was dating Laurie Divita. Due to nagging injuries, I was not the runner I used to be. I watched her compete in the NYC triathlon and I became interested. I used to be a lifeguard, but my swimming needed work. My competitive career was over as a runner, but I could still run. I spent 2007 as a bike messenger in NYC, so I knew how to aggressively ride.

In 2008, I competed with Laurie in the NYC triathlon. It took me over 5 hours to do the Olympic distance and it was disappointing. Laurie and I would train in the pool in the winter and cycle indoors/outdoors and run stairs, hills and distance. The following triathlon in NYC, I finished in under 3 hours. We competed in Olympic triathlons in NYC and Las Vegas and eventually Atlantic City and the IRONMAN 70.3.

There was a difference between when I raced and when I competed in the triathlons. In the triathlons, I was just another athlete. I enjoyed myself, had fun and gave advice to new athletes if asked. Because of Laurie, I transitioned to a much more enjoyable sport. I was no longer full of myself and competitive. I was now enjoying the event and competing with only myself.

1. What are your race goals for the 2019 season?
Without Laurie, I have to really focus on my training. It is easy to step back and quit because you lose your wife and training partner, but I have to beat my NYC time from last year.

2. Best racing advice?
Best advice ever, CREATE a log book of your training. If you miss a workout or two, it's ok. The point of the log is to see what you have done over a period of time. It is meant to be a reference of how far you have come since you started the log.

3. Favorite pre-race meal?
If we are talking about pre-race before a triathlon, it is a plain pasta with regular sauce if I am home. If I am away, it is Chicken Caesar Salad. The morning of the triathlon, before swim start, as much tea with milk and sugar I can take and a Blueberry Clif Bar. Blueberry Clif Bars on the bike as well.

4. What is your race mantra?
Get in the water, get into the rhythm. Visualize getting out of the water. Run to the bike. No excuses. Eat the Clif Bar. Visualize the road. Get into a tempo. Focus on cyclists ahead. Visualize dismount. Drop bike and run. Don't walk. Run. like the song. Keep running and don't listen to the negative voices in the head. Visualize the finish line.

5. Tell us three things we should know about you.
- I blame or credit Laurie Divita for my interest in triathlons.
- I spent 20 years teaching Shorinjiryu karate. Before I retired from teaching, the majority of my students had physical, emotional or learning disabilities.
- If I am at a triathlon, IRONMAN or duathlon and I am not competing, then I am photographing the event for the athletes.

My philosophy about relationships is find someone with a common interest. You will stay together for a long time.

Laurie was my wife and training partner for about 12 years. She overcame ovarian cancer twice. That was before we met.

After we met, we competed in 15 triathlons. She was amazing just because she survived the cancer twice and managed to compete in the triathlons, run the NYC marathon a year after her second battle with cancer. Not to mention a cycling tour of Ireland and riding with Lance Armstrong's team across this county. She didn't feel sorry for herself and lived her life.

Memorial Ride for Laurie:
On her birthday, April 13 at 10:00am. I am gathering a small group of friends and family in Weehawken for a ride up the West Side Highway bike path and a loop around Central Park, followed by moments at tavern on the green.

On April 28th, the nytri.org is dedicating their 1st Annual Cross Bay Duathlon to Laurie. It will be named after her permanently. The race starts at 7:30am in Rockaway Beach, NY. For anyone who would like to ride with me at 6:30 AM, we will ride the course in her honor before race start. All I ask is that you wear something Pink. It was her favorite color. If anyone wants to compete in the race, that would be great as well. If you would like to donate to the fundraiser in Laurie's honor, click HERE. You don't have to race to donate.

If anyone needs further info about the memorial rides, the race or donating to Gilda's club, email info@delmosports.com for Jim's contact info.

We're All Hurting, But We'll All Make It

The following contains zero information about what we have coming up this summer. If you're looking for that, move on. If you want to know what goes through the mind of a race director, a business owner, a family man, a real human being on a really tough day, read on.

Meet Kenny and Vinny, our mascots from Escape the Cape!