Meet Nate Horvath. He raced Escape the Cape 2016, but just a few months earlier, he survived a stroke. Prepare to be inspired. Here we go. 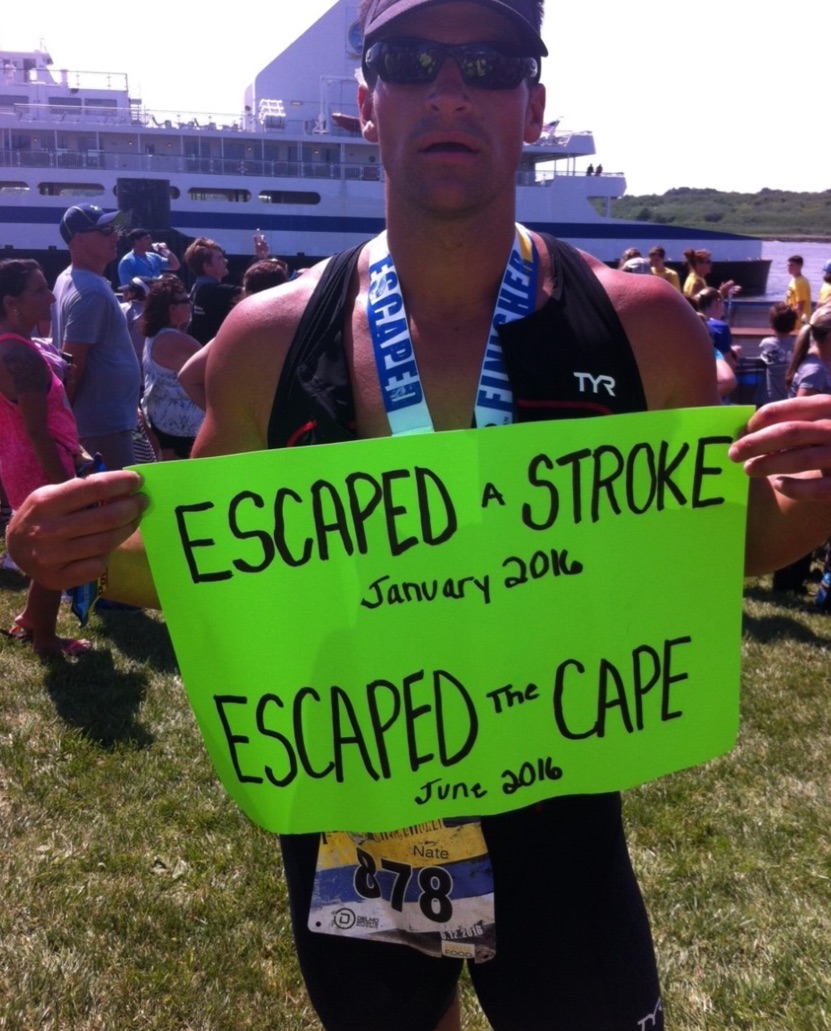 Each month, we sit down with a DelMoSports athlete and ask them five questions.

Meet Nate Horvath. He raced Escape the Cape 2016, but just a few months earlier, he survived a stroke. Prepare to be inspired. Here we go.

1. What are your race goals this season?

My goals for the race season were a little different at the beginning of 2016 than now.  I had planned on doing one Olympic in June, July, and August.   I had on stroke on January 31, and that changed things.  I had already signed up for Escape the Cape.  Since completing that, I have signed up for another Olympic in August and a half marathon in fall.   I’m using this month of July to train.

To quote CrossFit champ Rich Fronning… “In training you listen to your body, in competition you tell your body to shut up.”

5. Tell us three things we should know about you.

1) I am a funeral director, so I work with the dead!    I was overweight/heavy for the first 25 years of my life.  In September 2009, I said enough is enough, and starting living a new lifestyle with daily exercise and proper nutrition.  Race days, I’m usually 195.

2) On January 31, I was strength training (barbell curls crazy 8s).  I had a number of 31 reps in my mind, however at 22 I dropped to my knees.  Best way to describe how I felt was a grenade exploded in my head.  The pain slowly subsided through out the day, but never totally left.   Later that night, after much coaxing, I agreed to go to the hospital and get checked.   A spinal tap showed I did in fact have blood on my spinal column.   I was then sent directly to Neuro-ICU with the instructions not to move a muscle.  Dozens of tests followed, and it was determined that I in fact had a stroke, however I was very lucky that none of my motor skills were affected.   I was released from hospital a week later and told not to do anything strenuous.  Walk or swim were the only things I was able to do.  After my release from the hospital, I dealt with daily headaches, which they told me could last up to a year.

3) About 6 weeks later, on March 17 I was cleared and allowed to ease my way back into training.   They say for every week off, its takes 2 to get back it to the groove….I believe it!    Mid to late April I was out running, and still had no lungs.   However I kept pushing, determined to race Escape the Cape on June 12. And did!!  My run time was a bit slow, but all things considered, I’ll take it.

Put A Bow On It, People

2019 is done. For some, this was a year of incredible accomplishment. For others, this was the year that got away... again.