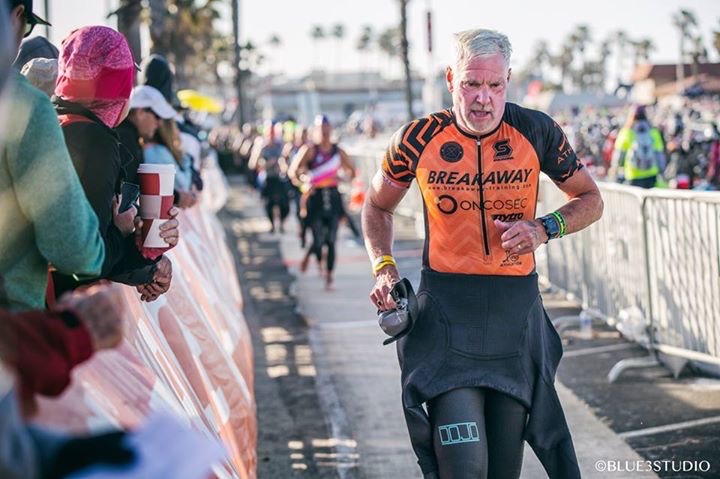 Each month we highlight a DelMo Athlete. This month, meet Superstar, Tony Berg!

Tony moved to the United States from Australia in 1981 and was introduced to the world of Triathlon in 1982-83 in New Jersey. For a few years, he was mainly running 5Ks, 10Ks, Half Marathons and Marathons. However, he became more drawn to Triathlon vs Running as the bike was his strength and the swim was so so. Tony introduced the sport of Triathlon to his son Chris at a young age - 14 years old. Their first Tri together and Chris beat Tony out of the water an beat him handily overall. They began to participate in more Triathlons together as Chris grew up. They did Vineman 70.3 where his son Chris would go to qualify for his first of 5 world championships in the 70.3 distance, and finally turned Pro in 2015/16.

Once moving to San Diego, Tony continued in Triathlon and met Bob Babbitt (fortunately 3 years younger so he only have 2 years where he beats the pants off him), Rick Kozlowski (founder of Koz events, now known as the San Diego Triathlon Series) and a bunch of others that all raced locally, did 70.3's and full IRONMANS, and made Triathlon such a great time of camaraderie and friendships, which becomes MORE important as we age. Also meeting up with Michellie Jones, big Matty Reed, Luke McKenzie, Greg Welch etc was extra icing.

He experienced knee problems starting in 2015 and did Aquabikes for two/ three years. Last year 2019, Tony decided he wanted to do a full IRONMAN. He missed the podium by less than two minutes as he would stop and talk to family and friends on each of the three bike loops, and the two run loops, but he made it under 17 hours with 44 minutes to spare. See video below!

1. Which DelMo event is your favorite and why?
Probably, as I have not been physically there to compete since the two Challenge Atlantic City events, I would say the two years that Stephen and Vigo did Challenge AC (I know not one of HIS favs). I did the full aquabike (my bad knee years) and took the AG win both years. Met Stephen and his passion for the sport and doing what it takes to make the event a success for each participant was clear. One of the reasons I strongly support local race directors. They make it so easy for us to play triathlon on any given weekend in the summertime.

BUT I have on my list that when I next visit NJ (hopefully next year) and am there for ANY DelMo event, I will sign up. My Goal is IM70.3AC, and would love to do the Escape the Cape Open Water Classic - 3 Mile Swim.

2. Where did you complete your #VirtualTRIAC (each leg), and what was your favorite part? (Maybe this includes figuring out where to swim/bike/run!)
The swims I did in the community pool (40 yards from the house) It is a 20 yard pool so I have an advantage of walls. I completed the Virtual Coronado rough water swim in July in the same pool and actually felt there should have been some sort of "adjustment" for pool swimmers, as it is an advantage both in walls, and in exact measurement of distance, and no currents.

The runs I did along a bike path near my home. It has a nice 1 mile out and one mile back with only slight grade,

The bike leg initially I did in the garage on the Cyclops trainer doing a Zwift route. No fun. Then I switched to doing the bike legs outside around Fiesta Island, The HOME OF TRIATHLON. (see photo)

For Virtual Tri the Wildwoods, the runs and swims will be in the same place and the bike will all be at Fiesta Island, where I only have to worry about camper vehicles that don't yield to cyclists. It is a circuitous route of just over 4 miles.

3. What is your race mantra?
My race mantra is one that Matty Reed wrote on my NYTRO visor, Race Hard.  I have only DNS one race (due to high winds and the expo was blown into the swim course) and DNF's twice due to flats on tubeless tires. Since moving to San Diego in 2010 I average 15-20 events a year, and this year after Virtual TRI WW, I will have done 13 already with hopefully three more virtual events and one real (HITS Palm Springs 70.3).

4. What’s your favorite workout song?
I don’t have one. When on the trainer I listen to Eagles radio or Fleetwood radio (shoes my age) and an occasional burst of ACDC.

5. What has been keeping you busy during Quarantine?
I ride twice a week with our Old Farts group, the Amigos. Currently a Wednesday ride usually two - four of us) and the Saturday ride where we are currently riding with a fellow Amigo in training for IM Cozumel, so those can be from 50-100 miles. And walking the Dog 5 times a day gets me an extra 5 miles also, in addition to 3 swim days and two jogging days. Being retired, there is also that list that appears on the refrigerator door each day of domestic chores.

6. Tell us three things we should know about you.
1) I am delighted to still be able to swim, bike and run ( OK Jog) at my age and have a fantastic support group of Athletes locally, from World champs. Olympic champs, National champs. both AG and Kona types.

2) I am incredibly proud of my family, who are all physically active, my Son the Pro triathlete (although that is on hold as he fractured the L2 in his back last November while in Hawaii surfing) and he currently works for Pinarello as Director finance Pinarello US., My daughter a nurse in today's times, and also an avid athlete, and my wife who tap dances. Both our kids are married, also to spouses that are active physically, and met their respective mates at Uni San Diego.

3) I am looking forward to when I turn 75, and hopefully then will erase that 2 minutes and get on the podium at a full IRONMAN (probably IMAZ).

4) *BONUS* I look forward to the several years I DO NOT have Bob Babbitt in my AG hehehehe. He is a great friend and even greater athlete for the AG.

We are so happy to have Tony participate in our Virtual events!! We wish you the best of luck on your #VirtualTRIWW!